Most of this week has been taken up marking GCSE German speaking tests. The central heating and hot water system has conked out, the burglar alarm has died, the satellite television hasn't worked since a recent storm, my desktop computer now even refuses to boot up and the brakes on the car have started to squeak and squeal, just a month after the car sailed through the MOT.

On Tuesday it was lovely to be back at Bewerley Grange chapel, Pateley Bridge for a missa cantata for the feast of St. Augustine of Canterbury. Fr. Parfitt offered the Mass and the Parish Priest joined the congregation once again.

Masses on Sunday for the Feast of Pentecost are at Our Lady of Lourdes, Cardigan Road, Leeds at 3.00p.m. The celebrant will be Canon McCreadie, former Dean of the the Cathedral and now Parish Priest of St. Paul's, Leeds.
At the same time Fr. Durcan will be offering Mass at St. Joseph's, Pontefract Rd., Castleford.

Reminder of the forthcoming Solemn High Mass of Requiem at St. Marie's, Halifax on Monday 15th. June, for the Repose of the soul of Fr. Charles Holmes, at 7.30p.m.

Please pray for the young men ordained to the Sacred Priesthood in Nebraska, America for the Society of St. Peter today. One of them, an Englishman, Fr. Goddard will be offering his first Mass in England later in June. Ad multos annos!
at May 31, 2009

A sharp sighted reader of this blog rang me at lunchtime to tell me that yesterday's posting was wrong - there is NO Mass tomorrow at Cardigan Road. It is of course NEXT week (Pentecost). Apologies for this error.

Mass at Batley this afternoon was well attended as was the Missa Cantata at Halifaxthis evening. Many thanks to Mr. Forbester and his Rudgate singers for a magnificent contribution to the dignity and solemnity of the occasion.
at May 23, 2009

On Saturday there will be Mass at Batley at 3.00p.m. and a sung Mass at Halifax at 6.00p.m. Both these Masses fulfil the Sunday obligation. On Sunday Mass in the Extraordinary form will be offered at Castleford at 3.00p.m. and also at Our Lady of Lourdes, Cardigan Road, Leeds at
3.00p.m.
Missa cantata on Tuesday, 26th. May, 11.30a.m. at Bewerley Grange chapel, Pateley Bridge.
at May 23, 2009 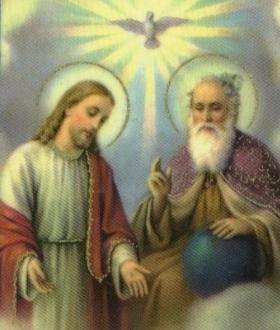 I had to copy and paste this from the Rorate Caeli blogsite:

A majestic address (main excerpts):
What happened here in Nazareth, far from the gaze of the world, was a singular act of God, a powerful intervention in history, through which a child was conceived who was to bring salvation to the whole world. The wonder of the Incarnation continues to challenge us to open up our understanding to the limitless possibilities of God’s transforming power, of his love for us, his desire to be united with us. Here the eternally begotten Son of God became man, and so made it possible for us, his brothers and sisters, to share in his divine sonship. That downward movement of self-emptying love made possible the upward movement of exaltation in which we too are raised to share in the life of God himself (cf. Phil 2:6-11).
The Spirit who “came upon Mary” (cf. Lk 1:35) is the same Spirit who hovered over the waters at the dawn of Creation (cf. Gen 1:2). We are reminded that the Incarnation was a new creative act. When our Lord Jesus Christ was conceived in Mary’s virginal womb through the power of the Holy Spirit, God united himself with our created humanity, entering into a permanent new relationship with us and ushering in a new Creation.
The narrative of the Annunciation illustrates God’s extraordinary courtesy (cf. Mother Julian of Norwich, Revelations 77-79). He does not impose himself, he does not simply pre-determine the part that Mary will play in his plan for our salvation: he first seeks her consent. In the original Creation there was clearly no question of God seeking the consent of his creatures, but in this new Creation he does so. Mary stands in the place of all humanity. She speaks for us all when she responds to the angel’s invitation. Saint Bernard describes how the whole court of heaven was waiting with eager anticipation for her word of consent that consummated the nuptial union between God and humanity. The attention of all the choirs of angels was riveted on this spot, where a dialogue took place that would launch a new and definitive chapter in world history.
Mary said, “Let it be done to me according to your word.” And the Word of God became flesh.
When we reflect on this joyful mystery, it gives us hope, the sure hope that God will continue to reach into our history, to act with creative power so as to achieve goals which by human reckoning seem impossible. It challenges us to open ourselves to the transforming action of the Creator Spirit who makes us new, makes us one with him, and fills us with his life. It invites us, with exquisite courtesy, to consent to his dwelling within us, to welcome the Word of God into our hearts, enabling us to respond to him in love and to reach out in love towards one another.
Benedict XVI
Vespers (Nazareth)
May 14, 2009
God bless the Pope!
at May 15, 2009

I can't promise very much by way of posts, other than odd reminders, as I will be engaged in marking GCSE Modern Language exams for the next month.
at May 13, 2009

Just a reminder that there is a sung Mass tomorrow (Sunday) at St. Peter's, Leeds Road, Bradford at 3.00p.m. The setting will be Lux et origo, with the Regina Caeli and Adoro te devote.
at May 09, 2009

Blessed English Martyrs, pray for us 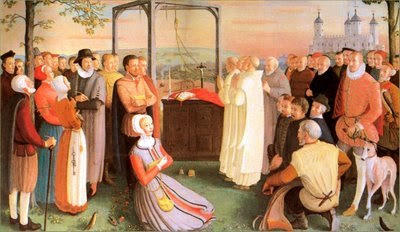 Tomorrow (Monday) is the Feast of the Blessed English Martyrs.

Who could deny that the inspiration of these heroic victims has been a bedrock to so many in recent years as we have seen the Church attacked from within and without?

As a result of a conversation with Fr. Abberton at Ushaw I have been doing some very enjoyable internet research on St Edmund Arrowsmith.

St. Joseph the worker, pray for us.

My eldest son Joe, delighted to learn it was his feast day (again) today, served Mass at Batley this evening. Before Mass we went to confession. I was suddenly shocked when offering my penance I heard Joe's high pitched voice starting his confession. Humming loudly in my head I made my way over to St. Joseph's altar, where the Mass was to be fittingly offered, and I encouraged my youngest son to light some candles and safely out of earshot of that shrill little voice shooting into the air immediately around the "box".
I mused over this during the nicely attended Mass; why I acted as I did. Had it been anybody else I would have moved immediately and thought nothing of it. But was it because it was my son, who could have been innocently "dropping me in it" in the box, or relaying something which would grieve me, etc., which were obvious factors, those which made me move away? I think not. That little penitent, my son, just like those before and after him (me included) entered into that box in the belief that he could say anything that could not be repeated outside of it. Inside I instinctively know that my son made a simple and sincere confession, probably forgotten about by supper time. What I conclude is that me and my boy, dad and lad, spoke to our heavenly Father. It just wasn't for me to hear what my son was saying to the Lord, to whom I had just spoken at exactly the same level.
This led me to muse about the Feast of the Worker, St. Joseph. A foster father with a mandate from God the Father to raise His Divine Son as his own. How touching then was the Gospel - recounting the finding of the Infant Jesus in the Temple. What did St. Joseph think? With what humility must he have approached Jesus? Would his instinct to have been to beat his son, more in relief and thanksgiving than anger? Did St. Joseph realise that this moment was the one he had been expecting since learning of the Incarnation and that Jesus was now an adult? Thereafter we hear nothing more of him in the Gospels.
at May 01, 2009 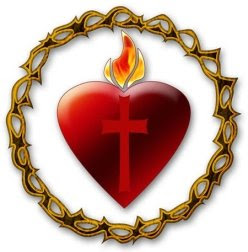