An Anglican clergyman and scholar from Oxford notes on his blog* about Basil Loftus...
"The man is a complete charlatan in the way he uses misinformation to deceive. I have just read a piece about how Rome subverts the desire of Vatican II for a vernacular liturgy. In this he fails to mention what V2 actually says ... and supports this assertion by a rhetorical trope of Paul VI, the word Dammit, and a claim that V2 is all about ecclesia semper reformanda."
I have long held the view that Basil knows only too well the dangers posed by the EF and the hermeneutic of continuity to his cosy but gaga ideas about "Church".
People like Basil were ten a penny in the seventies and eighties and are now an ageing breed. Do these people serve a purpose (like the doddering gang in charge of Catholics for a changing Church) in so much as anything they say can be taken with a large pinch of salt and ignored, given that what they call for is not the mandate of Christ or His Church?
* http://liturgicalnotes.blogspot.com/2010/08/some-priestling-called-loftus.html
at August 31, 2010

Masses this weekend and other news 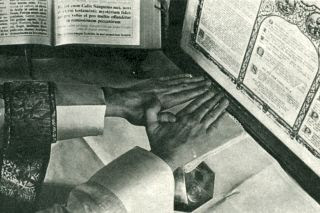 Masses will be offered fulfilling the Sunday obligation this weekend as follows:
Saturday 3.00p.m. St. Mary of the Angels, Crossbank Road, Batley.
Saturday 6.00p.m. St. Mary's, Gibbet Street, Halifax.
Sunday 3.00p.m. St. Joseph, Pontefract Road, Castleford.
Sunday 6.00p.m. Our Lady of Lourdes, Cardigan Road, Leeds. N.B. This will be the LAST Mass at Cardigan Road, as we will be relocating shortly. Details to follow.
The experiment with regular monthly Sunday evening Masses in suburban Leeds has been judged unsuccessful and with the dark nights to be shortly upon us again a new time and venue have been found, this also has to do with the fact that the church is to eventually close as part of the new pastoral provision in Leeds. Thanks to the PP Father Jackson (and his predecessor Fr. Kravos) who has been very kind to us - since he is to move shortly to St Augustine's in Leeds where we have already have one of our our third Sunday Masses, it is not even a case of au revoir let alone adieu!
Occasional EF celebrant and PP of St. Augustine's Fr. Kelly is to go to St. Austin's, Wakefield as curate. We already have a sung Requiem Mass "booked" at the chantry chapel in December to be sung by Fr. Smith, the Episcopal Vicar for Clergy and a regular celebrant of the EF.
We also bid a fond farewell to the PP of Our Lady of Good Counsel, Seacroft, Fr. Billington who is taking up a full time position at Ushaw. This means that there will be no more Friday Masses at Seacroft. Every good wish to Fr. Billington.
Father Wiley is to move to the newly formed Parish of St. John Vianney, which incorporates the former parishes of Immaculate Heart, Moortown and St. Paul's, Alwoodly.
He has already asked me to pencil in a couple of dates, as he did when he was at St. Columba's, Bradford.
I have also several priests to contact who have asked me to discuss the possibility of future Masses with them or other priests.
This morning (Friday) I was delighted to receive a cordial invitation from the Conference of Bishops of England, Wales and Scotland to attend the Beatification Mass of the Venerable John Henry Newman by His Holiness Pope Benedict XVI at Cofton Park, with my eldest daughter.
I saw the last Pope several times both here and in Italy years later. I have seen Cardinal Ratzinger before, having even translated something written in his own hand from his native German into English.
But I have never attended a beatification Mass and I haven't seen the present Pope since he accepted the throne of Peter.
Delighted to accept the invitation.
God bless the Pope!
at August 27, 2010

Who attacks the EF these days? 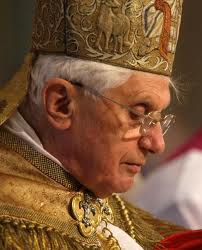 I have only ever bought the Tablet once and I long ago dispensed with taking the Catholic Times.
The reason for this is that I hate the attacks on the EF by Basil Loftus who is a retired priest of this diocese now living in Scotland.
Mgr Basil, whose father was a leading light in the early days of the very existence of the Latin Mass Society, will use any opportunity to criticize and downplay the vital role the EF has to play in the future identity of the Church, as seen by the tired and painful nonsense he churns out on a regular basis. Is this real hatred or is he overawed by the power of it?
Does the editor of the Catholic Times really "Follow Peter" by giving space to somebody who appears to worship V2 as something more than a pastoral council, the spirit of which still deludes itself into thinking that there was something new under the sun and that V2 was it? If so which Peter are we being exhorted to follow?
Surely the Catechism is enough for us as Catholics to accept and if we put the horrors of the past behind us, including the ever increasingly obvious erroneous spirit of V2 which seems to give the impression you can do what you like really, then the future's bright. It can't be anything but bright.
God bless the Pope! God bless Benedict XVI!
at August 23, 2010

The 3.00p.m. Mass at Batley has been postponed until next Saturday, but Mass is due to recommence at Halifax at 6.00p.m.
On Sunday there will be Mass at Castleford at 3.00pm.
I have been very busy meeting and contacting clergy this week and have arranged to meet with the Bishop after the Papal visit.
It is very interesting that at least three of the priests invited to meet the Holy Father in some capacity in September are celebrants of the EF in this diocese and all ordained since 1970.
Some of you may remember that under a former bishop no priest was permitted to offer the EF if he had been ordained after 1970 in this diocese. Mass in parish churches was discouraged.
Thankfully there were always faithful and generous priests who never said no to us and our legal requests. Some of these good men have now gone to their eternal repose but Mass is regularly offered for them. These include Cardinal Heenan, Bishop Wheeler, Fathers Cooke (OMI), Pepper, Holmes, Doughty, Woodward, Brooke, Cresswell, Scannell, and the many others who said yes whenever they could.
Today we have a new generation of priests as well as the older (but not necessarily elderly) stalwarts who are ready, willing and able to offer Mass in both forms. Even three years ago this would have been unthinkable.
One thing I have learned as a parent, teacher and moreover as lms rep is the virtue of patience! Some things take a long time to come to fruition. This last couple of weeks have seen quite a lot of fruition.
Details to follow.
God bless the Pope!
at August 20, 2010 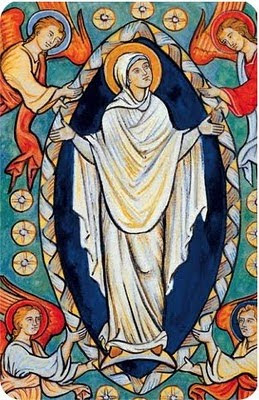 Two weeks off and away have made me feel much refreshed. This Sunday is the feast of the Assumption, the Holyday which comes round faster and faster every year .
Mass at Halifax has been suspended until next Saturday but on Sunday there will be Mass at Castleford, St. Joseph's Pontefract Road at 3.00p.m. and at Leeds, St.Augustine's, Harehills Road at 5.00p.m.
There is no Mass at Halifaxthe language of worship. Their Church utilizes every means of taking people beyond everyday interests; the language of commerce and of everyday occupation is left outside, and the people are taught the language of worship. That shows a shrewd, deep insight into the human mind."

It was a great pleasure to talk to a chap not much older than me who was a "first timer" for many years, after Mass at Castleford today.
He was clearly impressed and moved by what he had re-experienced and he was able to well articulate what he thought had been disastrous within the Church over the last four decades or so.
If that good man comes across this blog please feel free to attend any more of our Masses, listed on the right hand side of this posting.
at August 02, 2010