That sermon in full

I am delighted to be able to post a copy of Fr. Hall's sermon, delivered on the feast of the Assumption of our  Lady last week. 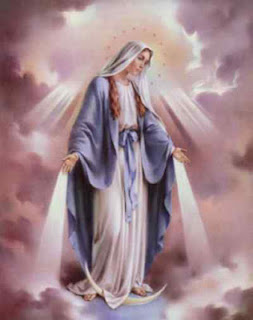 My fellow rep in the Hallam Diocese has initiated an LMS blog for his diocese -
http://latinmasshallam.blogspot.co.uk   Please visit the blog. It was only after two years of blogging that I realised I could check how many visitors to the blog I received. I'm sure he will be encouraged if he sees interest in the blog.

Mass at Broughton this morning and again this evening at Wakefield were well attended. There was also exposition and Benediction at Broughton.
This evening Fr Kravos offered a sung Mass again for us and is clearly getting into the swing of it. If there were nerves they were latent!
Fr. Hall was the preacher and what a treat he had in store for us. The celebrant repeatedly nodded his head vigorously and grunted in agreement at what he was hearing. I have seen nothing in Fortescue about this phenomenon.
I have with others requested Fr. Hall send me an electronic copy of the sermon. I hope he will assent to my publishing it on this blog - before I attempt to summarize what I rejoice at having listened to.
I think this is the nearest to a cliffhanger I'll ever come to on this blog.

Thanks also to the Schola Gregoriana of Leeds led by Mike Murphy and his group who were in excellent and festive form again. The Salve Regina to conclude the Mass was a really vibrant expression of our belief in our Lady, fuelled by what we had seen and heard. The ordinary was that of the Mass of our Lady.

I have had a delightful day from Mass this morning to a bottle or two of Chateau neuf du Pape this evening with the family and some unusual cheeses we brought back from an amazing fromagerie in Lille.

Things are looking up

A few years ago the only Mass within reach of here was in Liverpool. Now as well as Liverpool, there are Masses today in Manchester, Wakefield, Skipton, Newcastle, Sheffield, York, Leicester, Barnard Castle, Ryhope and New Brighton.
Brick by brick!

Happy Feastday!
Queen assumed into heaven, pray for us.
at August 15, 2012

Assumption of our Blessed Lady 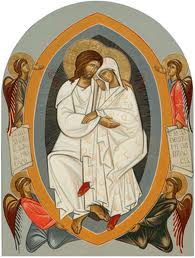 Wednesday is the Feast of the Assumption. There are two Masses in the EF in this diocese.

Father Parfitt will be offering a Low Mass at Broughton Hall's Sacred Heart chapel near Skipton at 11.30 a.m. Holy Mass will be preceded by silent adoration from 10.50 a.m.

At 7.00p.m. there will be Missa cantata at Wakefield's Chantry chapel. I still have a couple of tickets left. Our celebrant will be Father Kravos, who sang his first EF Mass earlier this year at Notre Dame in Leeds. Our preacher is Fr. Hall who offered the Mass last year and delivered a sermon upon which I still meditate.

Those of you who read Mass of Ages, please disregard the times of Masses at Broughton Hall as they are inaccurately reported.
Please note:

From September - Mass at Sacred Heart, Broughton,  will be offered every Sunday at 10.00 a.m. except FIRST Sundays when the regular sung Mass will now be at 11.00 a.m.
The time of the daily Mass is still to be established.

Sincere apologies to Fr. Parfitt for any embarrassment caused.
at August 13, 2012

I have just returned from a break in France and arrived back far later than I had anticipated, this meant that  I was unable to attend Mass at Halifax this evening (let alone post about it) as I was snoring my head off.
As two of my daughters are attending other separate functions tomorrow they made their ways to St. Mary's and came back together. Mgr. Smith was away and the girls were delighted to see Fr. Lister offer the Mass whom they have known from childhood.

Masses on Sunday are as follows: