2012 has seen a lot of firsts for us and a lot has happened in that time. This year saw another sung Easter Triduum, Masses on most days of the year including all Sundays, high days and holydays, the visit of Bishop Rifan and the first Pontifical High Mass since the changes when 18 men and boys and a portly bishop squeezed onto the sanctuary at Immaculate Heart, Leeds. The chaplain to the University of Leeds learned to celebrate the EF Mass and sang Masses at Notre Dame and at Wakefield's historic chantry chapel for the feast of the Assumption - executing both beautifully.
We had solemn High Masses for the feast of Ss Peter and Paul and to celebrate Mgr Smith's silver jubilee in December. Several children were baptized in several churches and we had First Holy Communion celebrations. Two sung Masses in the Dominican Rite were offered at Hinsley Hall organized by the Schola  Gregoriana of Cambridge and we were able to welcome back Fr. Lew OP who was the celebrant. Fr. Parfitt retired as Parish Priest of Broughton but remains as a daily celebrant at the Sacred Heart chapel, bringing our number of regular Sunday Masses to three but with up to five for some Sundays of the month.

I hope that 2013 sees as much if not more activity and that we get a worthy successor to Archbishop Roche who has taken up a desk job in Rome. Increasingly people who not long ago were new faces are now commenting on other new faces. We have people of all ages, colour and class and a very good number of priests willing and able to offer Mass if requested. I have had two priests say they wish to offer more Masses in this Rite and moreover we are hosting a servers' training session at the Leeds University Catholic Chaplaincy in February.

May I take this opportunity to wish everybody all good things in the new year. Mass for New Year's Day is at Sacred Heart chapel, Broughton Hall, Skipton at 11.00 a.m.
at December 31, 2012

Shambolic, a shambles, a sham


Not my words, but those of the Archbishop of Westminster who did not mince his words in commenting upon Cameron's bizarre efforts to redefine marriage.
Bishop Davies of Shrewsbury also took the opportunity to put the traditional Catholic perspective on this appalling decision to curry favour with homosexualists and which did not appear in any manifesto.

In other news the LMS Chairman, Dr. Joseph Shaw appears to be having a bit of a set to with our dear old friend Basil Loftus via the pages of the ghastly Catholic Times re the issue of female priests. There is a little taster on Dr. Shaw's blog http://www.lms.org.uk/around-the-country/oxford_rep
I think it was a blood crazed ferret journalist who once described Basil as a world class bore, which was quite mild for this journalist.

Information about weekend Masses will follow tomorrow, but there will be NO MASS at Leeds University chaplaincy on Saturday afternoon but there will be an extra Mass on Sunday at Wakefield at 7.00 p.m. in the chantry chapel on the Kirkgate bridge. 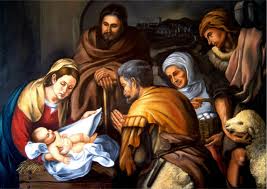 Merry Christmas and a happy new year to all our members and friends.

Masses this evening at Notre Dame, Leeds and Sacred Heart, Broughton have both been very uplifting experiences and I should like to extend my thanks to our servers singers and to Fathers Kravos, Hall and Parfitt.

Mass last Saturday for Monsignor Smith's Silver Jubilee was a very fine and memorable occasion. I am hoping that the gentleman who filmed the Mass will contact me soon with details of how to locate the film on You Tube. Monsignor asked me again to extend his thanks to the Rudgate Singers and the servers.

Masses for Advent IV on Sunday -

10.00 a.m. Sacred Heart,  Broughton Hall, near Skipton
3.00 p.m. St. Joseph's, Pontefract Road, Castleford (Tickets for the Mass at Wakefield's Chantry chapel next Sunday will be available at this Mass)

Congratulations to Mgr Canon Hugh Boyle, former administrator of Glasgow Cathedral and a dear friend to the Latin Mass Society - especially in this diocese and to Una Voce Scotland. For as long as I can ever remember Monsignor Boyle has been spending his holidays in Yorkshire and celebrating the Mass for us. He was the celebrant at the first High Mass in this diocese since the council, at St. Joseph's in Bradford. He was celebrant at the first Mass at Killingbeck following the issue of Summorum Pontificum and for many years led a summer pilgrimage and offered Mass at the shrine of St. Margaret Clitherow in York in very desperate times. Mgr Boyle celebrates his Golden Jubilee today and I would like to salute him on behalf of us all and say ad multos annos Fr. Hugh! Those who know the Canon will agree that his intelligence is matched only by his kindness and his candour. I have sent him a card and have requested Fr. Parfitt to offer Mass for him and his intentions on behalf of us all. 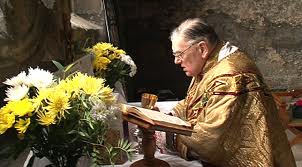 
Please take time out to go to confession in these next few days - no priest who offers the Mass for us will refuse confession at call in good time before or after Mass.

The above photo is from the Una Voce Scotland website http://www.unavocescotland.org.uk/index.html
I trust they will not mind my using their photograph.
at December 23, 2012

This weekend we have a SOLEMN HIGH MASS at St. Mary's, Gibbet Street, Halifax at 6.00p.m.
This Mass will be for Monsignor David Smith's Silver Jubilee. I remember when the embryo monsignor was ordained at Goole and the joy this gave to the then PP at St. Thomas, Old Goole, the late Father Charlie Holmes. Father was very proud to have a new priest from his parish. I know that Mgr Smith himself often recalls, with no little pleasure, the usual extravagant preparations Fr. Holmes made to make the event a memorable occasion - including the carpet upon which the ordinand was to prostate himself. Fr. Holmes was the priest whose practicality impressed Bishop Wheeler by producing a Jif lemon squeezie to cleanse his Lordship's fingers following a confirmation ceremony and a slice of diagonally cut Slimcea bread to dry them on!

On Sunday there will be 3 Masses:

On Sunday 30th. December there is to be an extra Mass on that day. The Mass will be a Requiem to mark the exact date of the battle of Wakefield and for the repose of the souls of all those who were killed as the Lancastrians defeated and killed the Duke of York. This was advertised in Mass of Ages and I have now received a couple of requests for tickets. Please let me know if you would like tickets for this. As the catafalque seems to be back in vogue - so the Mass will be followed by absolutions at same. Very fittingly again we will be guests at the Chantry Chapel, on the Kirkgate Bridge in Wakefield. This chapel was in existence even before the Battle of Wakefield. Sung Mass at 7.00 p.m.

I have been off colour for the last week but am now feeling much perkier.

Next weekend marks the start of the Silver Jubilee celebrations of Monsignor Smith of Halifax. The Rudgate Singers will be coming along to sing at the Solemn High Mass which will be a votive Mass of Our Lord Jesus Christ Eternal and High Priest. This Mass will be at 6.00 p.m. on Saturday 15th. December at St Mary's, Gibbet Street, Halifax. Ad multos annos Monsignor.