Please remember to adjust your clocks 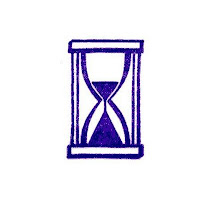 BST comes to an end until March and we revert to GMT tonight and need to remember to put back the time on our clocks and watches by one hour, which theoretically means an extra hour in bed.
at October 30, 2010 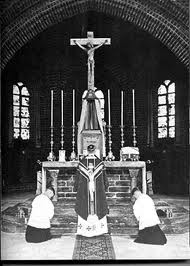 There will be 3 Masses on Tuesday for the Feast of All Souls in Leeds Diocese.
6.45a.m. St. Mary of the Angels, Batley
11.30a.m. Sacred Heart, Broughton Hall, Skipton
7.30p.m. Holy Spirit, Bath Road, Heckmondwike
Salford Diocese
Mass at English Martyrs, Alexandra Road South, Whalley Range, Manchester at 7.00a.m. and 7.00p.m.
May the souls of the faithful departed, through the mercy of God, rest in peace. Amen.
at October 29, 2010 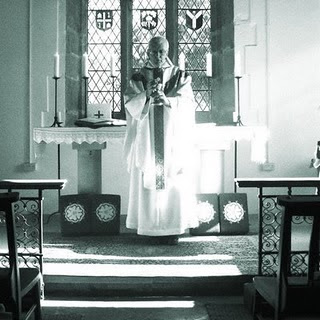 A gloriously pleasant autumn day saw a Missa Cantata in the upper Nidderdale village of Bewerley at Bewerley Grange chapel, a former grange chapel of Fountains Abbey and ideal setting for the Mass earlier today.
As ever, the Anglican custodian, Sr. Mary Cuthbert was on hand to see everything went smoothly and was truly most welcoming.
The sermon about Saints Simon and Jude was given by the celebrant Fr. Parfitt of Broughton, and interspersed with some of the theology of Bl. John Henry Newman was received by the congregation of well over twenty including the PP of Pateley Bridge, Canon Vincent.
We have three Masses per year at Bewerley, at autumn, early spring/late winter and early summer half term and each time the mood of the Mass is finely in tune with season and is always at 11.30a.m.. Today was no exception. Many thanks to Fr. Parfitt who also invariably brings everything with him for celebration of Mass - which saves me a job. Today four children including the daughter of one of my former pupils were in attendance. Strangely my youngest son likes going to Bewerley because he articulates the fact that he doesn't feel bad about talking in church before Mass.
The above photo is one from a previous occasion when Fr. Parfitt offered Mass at Bewerley.
Please remember the EF Mass is offered regularly in this diocese as can be seen in the sidebar.
at October 29, 2010

As I write this the November edition of the LMS magazine is at the press.
Mass at Bewerley Grange chapel, Thursday 28th. October. Missa Cantata. 11.30a.m.
Mass at Sacred Heart, Broughton Hall, Tuesday 2nd. November. 11.30a.m.
Sung Requiem for our War Dead, St. Peter's , Leeds Rd. Bradford, Sunday 14th. November. 3.00p.m.
Mass for the feast of the Immaculate Conception, Sacred Heart, Broughton Hall. Wednesday 8th. December. 9.30a.m.
First Mass of Christmas, Notre Dame Chapel, Leeds University Chaplaincy, St. Mark's Ave, Leeds. Friday December 24th. 6.00p.m.
Wakefield chantry chapel, Wakefield. Thursday 30th. December. 7.00p.m. Sung Requiem to mark the anniversary of the Battle of Wakefield.
New Year's Day Mass, Immaculate Heart of Mary, Harrogate Road, Moortown, Leeds. NOON.
As ever please do all you can to attend as many of these Masses as possible.
The University Chaplaincy will from November become a regular venue. We will be having Mass there on each fifth Saturday of the month at 4.00p.m. as well as the First Mass of Christmas. Many thanks to Fr. Kravos, the chaplain and old friend from his days at Our Lady of Lourdes for permitting us use of the beautiful chapel.
Reminder that there is now Mass each Friday (except last Fridays) at Holy Spirit, Bath Road, Heckmondwike. 7.30p.m. Thanks to Father Abberton.
at October 18, 2010

Mass for All Souls in York

I have now managed to secure priests for the First Mass of Christmas, All Saints, All Souls and Remembrance Sunday. Details in due course.
at October 10, 2010 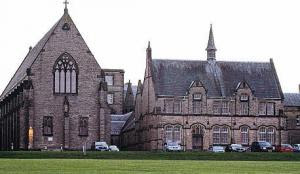 The Reverend co-ordinator for the EF Mass in the diocese of Leeds, Fr. Wiley (and who trained at St. Cuthbert's Seminary) rang me yesterday afternoon to say that he had just been told of the planned closure of Ushaw. Since then reaction has been from far and wide. Some people are naturally sad and others are ambivalent. There are those who are glad to see the end of the place.
Instead of looking back nostalgically (I've only ever been there twice) I cannot in any way revel in the glories, or otherwise, of its past, save the LMS Conference Masses in the main and side chapels.
Looking to the future however, I cannot fail to miss considering the possibility of some traditional Catholic future for this ready made Catholic Village in need of a good deal of renovation but with enormous potential in the right hands.
Look at how the Holy Redeemer Community on Papa Stronsay work and market themselves. Look at the Franciscan Sisters of the Immaculate in Lanherne in Cornwall who took over the defunct Carmelite Convent there and are now reputedly looking to establish a third house in this country. Look at the Emmaus Communities, the Pro-Life Organizations, the need for a place to host traditional Catholic training conferences and ongoing formation and even the need for a good Catholic school, not to mention the possibility of continuing priestly formation as an orthodox Catholic seminary.
Come to think of it, there are infitnite possibilities, but that they be Holy, Catholic and Apostolic must surely be at the heart and soul of it. The thought of the beautiful chapel being transformed into a two tier restaurant or auditorium as part of some "development plan" of a business park consortium is very sad. The Church is losing another footing in that part of the world, ironically the Darlington Carmelites (now down to only four nuns) were reported by the BBC to be leaving their convent to live in a detached house nearby this week.
Mr. Paul Waddington, the LMS Rep for Middlesbrough and Treasurer to the Society has posted elsewhere on the blogosphere his desire to hear from any interested party or parties interested in Ushaw's future, and not necessarily with his LMS Treasurer's hat on.
Something for us to pray about.
God bless the Pope - and a reminder of Mass on Sunday 10th. at St. Peter's, Leeds Rd. Bradford at 3.00p.m. in thanksgiving for the success of the Pope's recent achievements, to conclude with the Te Deum.
at October 09, 2010 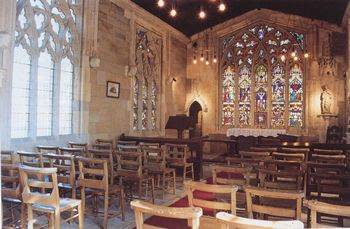 Photo: Interior of Wakefield Chantry Chapel- see below
On this Sunday 10th. October at 3.00p.m. the regular monthly Mass at St. Peter's, Leeds Road, Laisterdyke, Bradford will be a Missa Cantata, with a Te Deum at the concusion of Mass in thanksgiving for the success of the visit of the Holy Father and in recognition of the third year of the implementation of the Motu Proprio Summorum Pontificum . Many thanks to Fr. Hall for offering the Mass and Fr. Frank Smith PP for so graciously allowing us all and more as envisaged by the Pope in Summorum Pontificum. It is wonderful to see the Papal flag fluttering outside the Parish Church.
Already half term is looming which reminds me that our next Mass at Bewerley Grange Chapel, will soon be upon us. Sung Mass at 11.30a.m. near Pateley Bridge on Thursday 28th. October. Many thanks to Fr. Parfitt for this.
So far the only Christmas Mass I am able to announce is in the Salford Diocese where I am also rep.
Midnight Mass (at midnight!) will be at Bolton, at St. Osmund's, Long Lane, Breightmet.
This is a regular event and one I can heartily recommend and which we are again attending.
Those in Manchester early on this coming Monday (Oct 10th.) morning may be interested to know that there will be Mass at English Martyrs', Alexandra Rd. South at 7.00 a.m. for the Feast of the Motherhood of our Lady.
There is to be a sung Mass of Requiem at Wakefield Chantry Chapel on Thursday 30th. December in the evening, which also marks the date of the Battle of Wakefield. This is a civic event. The Lord Mayor will be present with other dignitaries. I have 10 tickets to offer those who wish to attend with promise of more if required.
On New Year's Day there will be Mass at the the Church of the Immaculate Heart of Mary, Moortown, Leeds, the first in this newly formed parish of St. John Mary Vianney. Details to follow.
at October 09, 2010 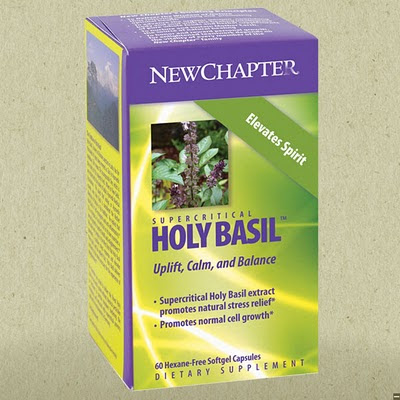 A Monsignor writes....
I can heartily recommend "Supercritical Holy Basil ", just like me it uplifts, calms and balances. If only every member of every Eucharistic Assembly had me as its President there would be no need for a Catechism, just me, and my word is law. If you don't believe it I'll sue you because I was at the pastoral Council and so I know.
Mgr Fawlty is a retired priest of a pre V2 mould.
Update; Please note Holy Basil comes in capsule form.
at October 07, 2010