I am very pleased to say that we are adding two "new" priests to the Sunday and Holy Day rota at St. Joseph's, Bradford, starting from September.

Mgr. Paul Grogan who regularly offers Mass at St. Winefride's and St. John the Evangelist churches in Bradford will join us in September. Monsignor is certainly no stranger to the Extraordinary Form having offered his first EF Mass way back on 19th. December 2019. He has offered the EF Mass ever since. 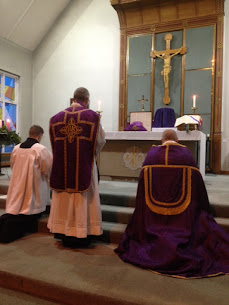 Also re-joining the rota is Canon Tim Wiley, who offers Mass regularly at Pontefract and until his move there from Immaculate Heart, Leeds was a regular celebrant in the earliest days at St. Joseph's, Bradford and before then at St. Mary's, Batley and St. Columba's in Bradford where he also regularly offered the EF Mass. 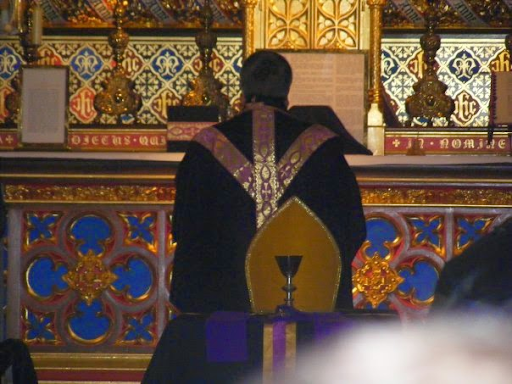 Fr. Wiley offering Mass in  Leeds Cathedral's Blessed Sacrament chapel for the repose of the soul of Bishop  Wheeler.

I cannot let this post go without mentioning the kindness and unconditional acceptance at St. Joseph's for those who come to the old Mass, the Ordinary Form and the Ordinariate Mass. In central Bradford we are not going to achieve the dizzy heights of the Parish of Saints Eugene and Celia in central Paris, where the old and new rites happily co-exist, with a choir which could bring a tear to a glass eye and an astonishingly beautiful Gothic interior.

I only wish St. Joseph's were in Paris at the moment as foreign travel has lost its appeal for the moment..

This week's  EF Masses as follows:

I am sure that before too long there will be a public daily Monday and Saturday Mass in the diocese to re-complete the daily provision since Fr. Parfitt's death last year and the effects of lockdown.

I don't make a habit of copying and pasting from other blogs but I thought this had to be shared. I thank the American  Rorate Caeli blog for this post. It is a very fair and eloquently translated response to the TC motu proprio  from a retired Argentinian Archbishop who has never celebrated Mass in the EF in his nearly fifty years of priesthood. It is well worth reading, even if the photograph of his grace  is a bit strange given the context. 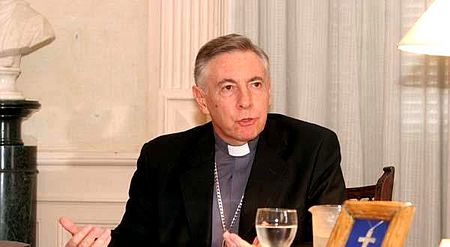 An up to date photograph of Abp. Aguer. 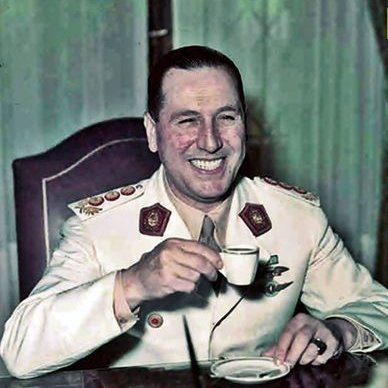 To conclude, I seem to notice a relationship in the tone of the Resolutive Decree and the speech given by the Holy Father last June 7, addressed to the community of priests of Saint Louis of the Frenchmen in Rome. I perceive in both texts (I could be wrong, of course) a lack of affection, despite certain appearances. It is true that the motu proprio, by the nature of its genre, does not allow for pastoral effusions; however, in its conciseness it could have been presented as a sign of pastoral love. The comparison does not seem arbitrary to me; in both cases it would be desirable to notice that merciful attitude that is so celebrated in the current Pontiff. It would seem that the judgment that the Church renders, in its highest instance, of the course of ecclesial life proceeds according to two weights and two measures: tolerance, and even appreciation and identification with heterogeneous positions with respect to the great Tradition ("progressive", as they have been called) and distance or dislike with respect to persons or groups that cultivate a "traditional" position. I am reminded of the purpose that a famous Argentine politician [Juan Domingo Perón] brutally enunciated: "to the friend, everything; to the enemy, not even justice." I say this with the utmost respect and love, but with immense sorrow.
[Translated by E.F.]
____________
* Abp. Héctor Aguer is a well-known Argentine bishop, characterized by his very broad culture, his conduct openly favorable to the Natural Order, and his struggle against the enemies of the Faith and the Church. After a fruitful ecclesiastical career, he became Archbishop of the City of La Plata, capital of the Province of Buenos Aires. His relationship with Pope Francis was always correct, obedient, and in accordance with his authority.
https://rorate-caeli.blogspot.com/2021/08/op-ed-with-traditionis-custodes-francis.html
at August 28, 2021

This week and Pentecost XIV

Apologies for the late posting. We have been away for a few days enjoying the sea air and sunshine near Heysham and now our youngest daughter has been taken to hospital. Please say a prayer that they find out what is the matter.

On Thursday there will be Mass at St. Anthony's, Bradford at 9.30 a.m. BUT no Mass at Pontefract as Canon Wiley is on holiday.

Mass at 7.30 p.m. on Friday at St. Austin's, Wakefield, will be in thanksgiving for Cardinal Burke's continuing recovery from pneumonia due to the coronavirus. Deo gratias.

It has been very heartening to see so many new and young faces at Mass on Sundays recently at St. Joseph's, Bradford. An occasional visitor said to me that the congregation was a real cross-section of society. 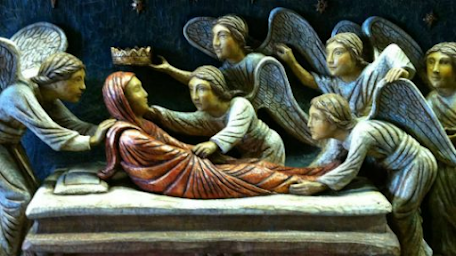 This Sunday is the feast of the Assumption of Our Blessed Lady, defined as dogma by Pope Pius XII in 1950 and codifying traditional belief and practice regarding the dormition or assumption of the Mother of God or Theotokos.

I am really very happy that our regular 1.00 p.m. Mass at St. Joseph's will be a Low Mass followed by Benediction of the Blessed Sacrament and prayer of Consecration to Our Lady.  I am happier still that Fr. Kevin Driver will be the celebrant following his recent recuperation. Not a pair of crutches to be seen I hope.

I cannot remember the last time we had Benediction on Sunday after Mass at St. Joseph's but I think it was Fr. Driver who was the priest then.

I am pleased to say that Low Masses are now again followed by the Leonine prayers for the Church. I think we need them in this Covid world as much as ever.

No Mass at St. Winefide's on Wednesday. Father is away.

Fr. Aladics at Ossett contacted me as I was at a wedding in Bradford this afternoon to say that he has cancelled all Masses at St. Ignatius this weekend except one because he is unwell. He is keen to point out that has nothing to do with Covid19. This means no 8.30 a.m. Mass at Ossett in the morning. Apologies for the late notice but I have only just returned.

The feast of the Assumption 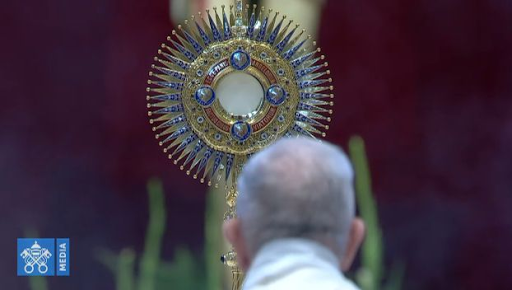 I am delighted to report that Fr. Driver will be back to his third Sunday slot on the feast of the Assumption  at St. Joseph's, Bradford, following his recent surgery. He has readily agreed to offer the prayer of consecration to our Blessed Lady after this Mass and I am hoping that this will be in the context of  Benediction post missam.

Fr Angel, the Parish Priest at St. Joseph's Bradford, has asked that congregants at all Masses remember to either sign in electronically or to voluntarily sign in, on the paper list at the back of church to confirm with latest Covid-19 guidelines.

I shall ask Fr. Hall to announce this on Sunday.

From the Wakefield Deanery:

Fr Aladics has asked me to point out that as it is the summer season there will be no EF on Tuesdays, 3rd, 10th and 17th but the Sunday Masses will continue at St. Ignatius, Ossett.

Reminder that there will be Mass at St. Joseph's, Back Street, Pontefract on Thursday 5th August and on Friday at 7.30 p.m. at St. Austin's Wakefield.

From the Bradford Deanery:

A word of thanks

It was a pleasure to welcome the Dean of the Bradford Deanery, Fr. K. Walker, as a congregant at Mass at St. Joseph's today. He rang me shortly after the publication of Traditionis Custodes to express his dismay at the contents of the document. He said he would visit us soon and today he came. It was a very welcome gesture.