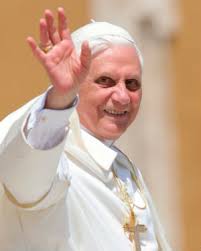 The regular first Sunday Mass at Sacred Heart, Broughton Hall near Skipton will be upon us shortly. Thereafter Mass will be offered EVERY Sunday at 11.00 a.m. instead of at 10.00 a.m. It is hoped that the later time will be more attractive to those who live some distance away from the chapel including those from this side of the Salford and Lancaster dioceses.
As ever thanks to Father Parfitt for this.
at February 25, 2013

Mass for election of a Pope

On Friday we will be truly sede vacante in Leeds - no Pope, no Bishop.

The Mass at Immaculate Heart, Leeds on Friday (1st. March) at 7.30 p.m. will be a Votive Mass for the election of a supreme Pontiff. It would be good to see a good number of people at this Mass to pray for a worthy successor to Pope Benedict - a man, whoever he is, who will need great courage and strength to guide the Church.

I have just read on the Transalpine Redemptorists' blog that from 7.00 p.m. GMT Pope Benedict will be referred to as His Holiness, Benedict XVI, Bishop Emeritus of Rome. For the announcement copy and paste the following link 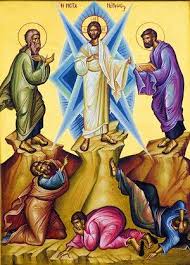 Masses this weekend for the second Sunday of Lent are listed below:

This will be a historic week as the Holy Father will abdicate at 8.00 p.m. on Thursday leaving the Church sede vacante. On Friday,  First Friday Masses will be at

At 2.00 p.m. on Saturday 2nd March, Mgr Gordon Read, National Chaplain to the LMS, will be celebrating a Solemn Mass in Westminster Cathedral.  It will be the Votive Mass, pro eligendo Summo Pontifice (for the election of a Pope).Although a Mass at Westminster Cathedral on this date has been planned for some time, the resignation and Pope Benedict, and the expected calling of a conclave for later in March, has given the event added significance.  Furthermore, I understand that there is a possibility that the Mass will be televised, and therefore reach a wider, possibly worldwide, audience.

Thank you to all who made our training day at Notre Dame chapel possible today (pictured above).

Thanks to Fr. Kravos for so readily permitting us to use the chapel and excellent facilities, to Fr. Wiley for singing the Mass for us and to Mr. Waddington for sharing the tuition with me. It was wonderful for him and me to watch the tutees serve a sung Mass with only the odd mistakes. One gentleman is now going to serve Low Mass the next time his Parish Priest offers Mass in the parish, whilst our youngest participant graduated from Low Mass server, to candle bearer to thurifer and carried out this function with great precision at the Mass.

Reminder that later this week there will be a sung Mass for the second Thursday of Lent at Bewerley Grange chapel, Pateley Bridge on (CORRECTION) February 21st. at 11.30 a.m. (Photo - Fr. Parfitt at Bewerley)

On a sad note I learned from Fr. Kravos of the death of Canon Dennis Tangney who was the first priest to offer the Sunday indult Mass at Killingbeck Cemetery chapel back in 1988. On that occasion he was not particularly happy about it. When he retired many years later it was like us losing a member of the family. Canon Tangney was a pastoral priest and a very fine preacher whom I always looked forward to hearing. The late Gerry Lyons often recounted the occasion when Gerry had gone early to Killingbeck and there was a terrible snow storm. Mass was due to start and only Gerry was there, until he saw a muffled figure walking up the drive to the chapel. It was Canon Tangney who had abandoned his car and walked to say the Mass. He vested as if nothing was amiss and proceeded to offer the Mass. After the Gospel he turned to Gerry, who was serving and the only other person there and said, "I'll preach if  you  like."
Canon Tangney died on Friday night at 6.30 p.m. at the home of the Little Sisters of the Poor in Headingley.
May he rest in peace.

Tomorrow (Saturday) we have our server training day at Notre Dame chapel, Leeds University Chaplaincy, St. Mark's Avenue,  Leeds. The doors will be open from 10.00 a.m. for a prompt start at 10.30 a.m. Please bring a packed lunch and something to drink.
Mass will be at around 3.30 p.m. and will be in anticipation of Quadragesima.

10.00 a.m. Sacred Heart, Broughton Hall, Skipton.
3.00 p.m. St. Joseph's, Pontefract Road, Castleford. I shall ask Fr. Driver to sign a Mass card for me to send directly to the Holy Father on behalf of the LMS in Leeds as suggested by Fellow Rep Mr. O'Neill, Hexham and Newcastle. (see sidebar)

Please note the scheduled Mass at Heckmondwike, Holy Spirit, will now be next week at the usual 4.00 p.m.
Please do anything you can to support Fr. Abberton's Masses at Holy Spirit. I was ashamed to hear that attendance there earlier this month was down to only 3 people. Let's hope it was the weather to blame. 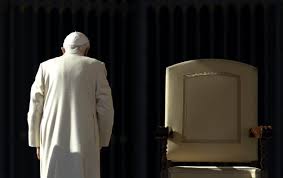 I must confess to having been extremely shocked today when I checked the blogs in my coffee break this morning. I even thought that perhaps I'd not realized it was April 1st and not February 11th. I had to leave the school premises and have a cigarette or two to get my head round what I'd read.
Whilst listening to the BBC news on Radio 4 at 5 o'clock on my way home and I heard the pope's address in Latin I had to choke back a tear or two. One of my daughters had already rung home from University to say that she had been similarly moved. We had both had front row seats at Birmingham when his Holiness visited our country.
This said I do have to admire the Holy Father's courage in breaking with a tradition which is centuries old. I saw on the internet that he had left his pallium at the tomb of Pope Celestine V at Aquila in 2009 after the devastating earthquake there. Pope Saint Celestine resigned the papacy in 1294 aged 79. No doubt Pope Benedict saw first hand the effects of the ill-health suffered by his predecessor, Blessed John Paul,  and moreover the effects it had on the Church in that suffering Pontiff's final years on earth.
Benedict has taken a courageous step forward - in humility and more importantly in Faith - faith that it is the Holy Spirit who guides the Church. There can be little doubt that the Pope's physical frailty is something he does not wish to hinder the progress of the Church especially in these dreadful times in which we live. He is to all extents and purposes still a man with a mission but is wise enough to know that there are others who can take forward his reforms whilst he starts to live a life more accustomed to someone in their mid-eighties and out of the spotlight and flash of cameras everywhere he goes. A natural teacher and not the Rottweiler he had been dubbed at his election, it is strange that this crass tag soon fell into the oblivion it deserved.
How things will develop with a Pope emeritus and who will now lead the Church remain to be seen. The Pope has obviously given this matter no little thought and prayer.

We here in Leeds Diocese, will I believe, for the first time be hearing Mass where no Bishop or Pope is named in the Roman Canon from March 1st 2013.
In the meantime we will soon be having a Votive Mass 'Pro Eligendo Summo Pontifice': the Mass 'Suscitabo mihi', which seems very odd given that we still have a Pope, who many of us love and who will be mentioned in the Roman Canon, the norm being that the Church is usually in mourning when this Mass is offered.
God Bless Pope Benedict XVI and may Joseph Ratzinger have a long and happy retirement.

A congregation of over 70 came to our first Mass at St. Joseph's, Bilton and I would like to thank Father Byrne, the Parish Priest and the celebrant Fr. Smith, who is an army chaplain. I would hope that we will be able to return to St. Joseph's in the future. 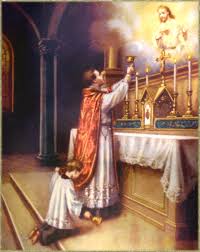 On Saturday we shall be having our training day at Notre Dame, Leeds University Catholic chaplaincy, St. Mark's Avenue, Leeds. We will be starting at 10.30 a.m. prompt and concluding with Mass at 3.30 p.m. I am working on the premise that this will be a sung Mass in anticipation of the first Sunday of Lent. Please bring a packed lunch.

Masses this Sunday, the last before Lent begins are as follows:

Mass for Ash Wednesday at Broughton Hall at 11.00 a.m.

As well as being the feast of Sexagesima yesterday it was also the feast of St. Blaize and so throats were blessed after each of our Sunday Masses.
St Blaize is also the patron saint of wool combers and hence Bradford, because of the city's link with the production of fine quality worsted wool. There is a statue of St. Blaize in the city's wool exchange (see picture), now an excellent bookshop and one of the few quality shops left in the city. There was a secondary modern/middle school of the same name (which ironically burned down in a terrible blaze) and there is now a parish dedicated to him in Bradford.
He is the patron saint of Bradford on account of his atrocious martyrdom where wool combs were used to bring about his demise. He is often pictured holding a wool comb.