A very gloomy day weather wise was brightened by the sung Mass in Upper Nidderdale in honour of our Lady of the Rosary today. A schola of four sang the Mass and Fr. Parfitt preached eloquently on the power of the Rosary drawing comparisons from the time of the Reformation when rosary beads had to be put out of sight, rather redolent of today's attacks on wearing crosses and crucifixes at work. As Fr. Parfitt has said before, there is nothing new under the sun. I suppose what goes round comes round. We were given food for thought.
It was very nice to see Canon O'Hara the PP in attendance and four servers. One lady had come from Pocklington and a couple from south Manchester.
at October 27, 2009 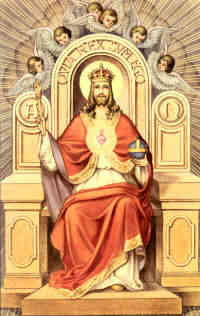 All Masses offered this weekend include the indulgenced prayer of Consecration to the Sacred Heart of Jesus from the Ritus Servandus.
at October 24, 2009

Fr. Abberton will be offering Mass on All Souls at 7.30p.m. but will be unavailable on Saturday 31st. October for his regular Saturday morning Mass.
The All Souls Mass is one of a growing list in this Diocese. 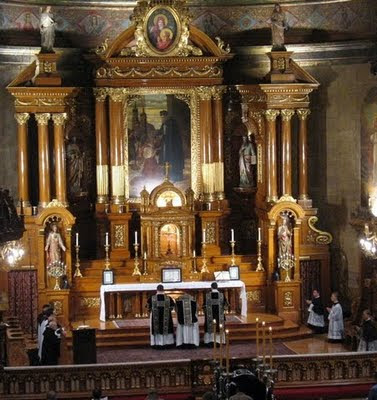 I am writing this post on my new computer. Both my old laptop and desktop have recently died on me and internet connection has been a bit of a hit and miss business. And still is!
The good news is that I can now confirm that the Traditional Mass is again welcome in Leeds Cathedral and that a sung Mass of Requiem for the repose of the soul of Bishop Wheeler will take place at the Cathedral on Saturday 28th. November at 3.00p.m.
Clergy reading this are welcome to attend in choir dress.
Photo above is simply for illustrative purpose and has nothing to do with Leeds Diocese or Latin Masses offered there.

Not instantly recognizable as one of life's biggest optimists, even I felt the feel-good factor throughout the entire inspection over the last couple of days. Having received "outstanding" twice in the last two inspections, but under the old rules, I expected to be seen this time, to see if I had adapted to the new rules. (Not something I'm normally given to! Meat....on Friday?) I was, however, not one of the chosen many.
In all honesty I felt quite cheated that they did not see the lessons I taught and moreover the learning that took place . I wasn't observed once. I have not been to bed before 3.00a.m. since Thursday night, nor have I been up after 6.50a.m. since Saturday. I am very tired. Yet, I have not really delivered anything different to what I would normally deliver. Paperwork was eventually in place and at least my limited interest in this boring part of the job was focused for the time I had and I was happy to think anybody could inspect it.
Thank you very much to those of you who offered me your prayers and more particularly to St. Anthony and St. Joseph for prayers answered.
Please pray for a friend of mine who is trying to discern a vocation to the religious life and also to a young lad who has put himself forward as a candidate for the Priesthood.
Of you charity please pray for the repose of the soul of a 16 year old girl from my school who died tragically a few days ago and for her family and friends. At her parents' request any mention of this tragedy must go with the request that we should always wear a seatbelt.
May she rest in peace.
REMINDER
Regular Masses on Sunday at St. Joseph's Pontefract Rd. Castleford, resume on Sunday 18th. October at 3.00pm..
ALSO: The first of our regular 3rd. Sunday Masses at St. Augustine's, Harehills Rd. Harehills, Leeds start on Sunday at 5.00p.m.
at October 14, 2009

Following all that great news... 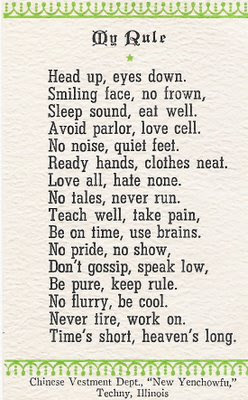 I have a copy of the above in my classroom. It inspires me.
Ofsted has given my school 24 hour notice of inspection to begin on Monday 8.40a.m. until Tuesday 4.10p.m. Totally confident of my ability to teach well, my only worry is that all the mind boggling paperwork on my desk, the sitting room floor, the dining table, my bedroom floor, the car boot and more worryingly, on my lost memory stick, will be in some sort of order before Monday. St. Anthony, pray for me. St. Joseph, inspire me!
Don't expect much by way of posting until at least Wednesday of next week!
God bless the Pope!
at October 09, 2009

The regular Sunday afternoon Mass at St. Joseph's, Pontefract Rd., Castleford at 3.00p.m. will resume on Sunday October 18th. This beautiful little church with very fine and devotional stained glass windows is centrally located and with ample parking.
This means that each weekend there will be at least three Sunday Masses per week.
It can only get better.
God bless the Pope!
at October 08, 2009 I had a very productive telephone conversation this evening with Mgr. Moger and subject to confirmation a sung Mass of Requiem will take place in the Cathedral in November.
This will be the first public Mass in the Extraordinary Form here since the Cathedral re-opened following extensive refurbishment.
I hope this will be the first of many.
Leeds Cathedral. Photograph by Fra Lawrence Lew OP.
at October 07, 2009

Last night at Batley many hundreds of people turned out to bear witness to the Faith and process from the Market Square to St. Mary's Church for Benediction offered by the Bishop. It is always touching to see the gleeful faces of all the little children illuminated by their candles, last year my youngest son even managed to set his hair on fire, much to the amusement of his older sisters.
Tomorrow is the feast of the Holy Rosary.
Mass at Batley at 7.00a.m. and at Broughton at 9.30a.m.
If you are in Manchester, Mass at English Martyrs, Alexandra Rd. South, Whalley Range at 7.00a.m.
After the torchlight procession I was able to chat with several clergy. All of them are regular or occasional celebrants of the EF and the others are good friends of the EF, allowing their churches to be used for the celebration of the Traditional Rite.
As a result of last night I have learned of extra Masses and finalized details of others, including Mass for the Feast of the Immaculate Conception to be held at Leeds University Chaplaincy, December 8th. at 7.30p.m. You may remember that this was where we had Mass for the Feast of the Annunciation in March and the Easter Triduum.
I have arranged meetings with some priests and will report future regular Masses in due course.
What is becoming very clear is that the Latin Mass Society's role in this Diocese has changed very dramatically over recent years. When I first became rep I had to request permission for each and every Mass, this was having had to negotiate a time and place and to find a priest who, quite frankly was willing to risk the ire or suspicion and even the ridicule of fellow clergy and superiors by agreeing to do it.
Under Bishop Roche no such restrictions as had previously been imposed existed and following the election of Pope Ratzinger and promulgation of his definitive Motu proprio, interest has really intensified among many priests and bishops, locally, nationally and internationally.
The greatest majority of Traditional Masses in Leeds (and Salford) are now a part of regular parish life. As I have stated before, the Extraordinary Form of Mass is not the property of the LMS, the FSSP, the Society of St. Pius X or anybody else. It belongs to the Church and the People of God.
If anything I need to carry on banging the drum that there is nothing suspect about this form of Mass and nothing dotty about participating at it. This means advertising the regular celebrations and persuading others to do the same. There is a lot to do and much to which we can look forward.
Ave Maria!
at October 06, 2009

Sunday 18th. October at 5.00p.m. sees the first of our new regular Masses at St. Augustine's, Harehills Rd., Leeds. Thereafter Mass will be offered here each third Sunday at 5.00p.m. Many thanks to Fr. Kelly, a longstanding friend of the LMS, the PP.

A reminder that the annual torchlight procession at Batley will take place on Monday (5th. October), starting in Batley Market Square at 7.30p.m. There follows a procession from the Market Place to the church where the Bishop will give Benediction of the Blessed Sacrament. If the event proves to be anything like the last two years it will be a wonderful occasion and an outstanding opportunity to bear witness to our Holy Faith in public and give honour to our Heavenly Mother in this month of the Holy Rosary.

The Parish Priest, Fr. Wiley, Diocesan Co-ordinator for the EF, has told me about the incredible amount of work which goes into this event. Please support it.