The next few days will be very busy for traditionally minded Catholics and this post sums up the events in a bulletin fashion.

Saturday sees the solemn Mass at noon for the feast of St. Michael the archangel at St. Austin's, Wentworth Terrace, Wakefield.

On Monday there is the traditional Batley Torchlight Procession starting at Batley Market Place at 7.30 p.m. and then processing to St. Mary's Church for Benediction of the Blessed Sacrament. The Bishop will be in attendance.

On Tuesday at 7.00 p.m. there is the first of this season's cycle of the Leeds Cathedral Lectures:

Ian Wilson is a retired freelance author specializing in researching historical mysteries, particularly ones with a religious slant. He graduated in History from Magdalen College, Oxford University. After converting to the Catholic Church in 1972, he then wrote a book on the Turin Shroud. The book became a best-seller both in the UK and USA, was translated into nine languages, and spawned a TV documentary, Silent Witness, co-scripted by him, that won a BAFTA award. A later book Jesus: The Evidence was similarly a bestseller. In 1994 his Shakespeare: The Evidence, arguing that Shakespeare was a crypto-Catholic, was also successful. Ian Wilson lives in Brisbane, Australia.

“The Turin Shroud: New Facts and a New Historical Theory”

(This lecture will directly challenge the widely accepted 1988 carbon dating “verdict” that the Turin Shroud is a medieval fake.  After a brief review of the Shroud image’s still unexplained photographic properties, its anatomical accuracies, its convincingness as a two-thousand-year-old textile, and the unsuitable location from which the carbon dating sample was taken, two hitherto overlooked mid-fourteenth century manuscripts will be presented shedding dramatic new light on the French knight Geoffroi de Charny, allegedly the Shroud’s first European owner)

On Saturday 6th October the embryonic Leeds Ordinariate of Our Lady of Walsingham will hold its second Mass in this diocese, the first having been a couple of weeks ago at the Cathedral. I was immediately impressed with the beauty of the language and the ritual, the latter of which any EF Mass attendee would immediately recognise. The  Mass will be at our own St. Joseph's, Pakington Street at 3.00 p.m. Fr. Stafford from Sheffield will be the celebrant.

Please do anything you can to offer your time for any of these events which a lot of good people spend a lot of their time organising and ultimately for the glory of God. As this Sunday's Gospel tells us - many are called but few are chosen.
at September 27, 2018 Reminder that there will be the Torchlight Procession in Batley on Monday 1st. October. starting at 7.30 p.m. in the market place at Batley.
at September 21, 2018

There will be Mass at St. Mary's Batley at 6.00 p.m. on Wednesday 19th September which Fr. Hall will offer again. The parish secretary has e-mailed to say she will ask Father Hall to make this a regular Mass.

The traditional Batley Torchlight Procession returns this year following the break last year because of repairs to the roof of the church.
The procession will begin at Batley Market Square at 7.30 p.m. and go from there to St. Mary of the Angels church. His Lordship the Bishop will attend the event. This is on the first Monday of October, so there will be a future reminder.

This weekend marks the seventeenth Sunday of Pentecost and we have three Masses on Sunday:

The Ordinariate of Our Lady of Walsingham 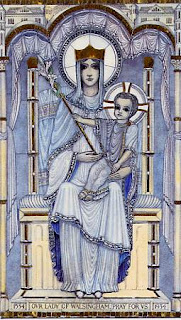 High Mass in the Cathedral
Church of Saint Anne

Great George Street/Cookridge
Street Leeds LS2 8BE
on the Memorial of
Our Lady of Sorrows
Saturday 15th September at 1.30pm

This weekend marks the sixteenth Sunday after Pentecost with the Gospel of our Lord curing the man afflicted with the dropsy.
We have two Masses:

The Mass last week at Broughton was a memorable occasion as the St. Austin singers from Wakefield sang the Mass with a mixture of polyphony and Gregorian chant. Many thanks to them.
There were a lot of new people and families at St. Joseph's last week and we were pleased to welcome back Richard Nicyperowicz who played the organ for us. It was great to hear Purcell's Trumpet Tune as the priest processed back to the sacristy.

This weekend is the fifteenth Sunday after Pentecost and St. Luke's Gospel records the widow of Nain whom the Lord raises from death.

As the summer draws to an end there are several high Masses planned before Christmas. Already preparations are underway for the annual Requiem for previous bishops at the Cathedral in November. Again this will be a Solemn Mass. I shall produce a fuller and detailed list shortly.

* Anybody wishing to attend the event in York on Saturday by public transport is advised that a strike has very much limited the accessibility by railway to York station at the usual frequent and regular times. Mass is at 12.10 p.m. at St Wilfrid's but this year pilgrims are gathering at the Bar Convent at 10.30 a.m.  i.e. before the Mass.