Sunday is the feast of St. Michael and this takes precedence over the green Sunday. This is hardly surprising given the number of references to Holy Michael in the traditional Mass and his importance in Catholic theology.

On Wednesday at 12.30 p.m. there is the sung Mass of Requiem for Agnes Rutherford at Ss. Peter & Paul church in Yeadon, followed by private interment. Fr. Driver will offer the Mass.

This weekend is the fifteenth Sunday after Pentecost and we have two Masses: 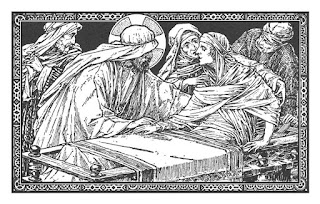 
It was with great sadness that I recently reported the recent death of Mrs. Agnes Rutherford who was for many years the Leeds Diocese Representative of the Latin Mass Society and Secretary to the Diocesan Reps for the LMS.
Her passing was serene and she had received the last Sacraments shortly before death. Please remember her soul in your prayers and please remember her husband and two daughters whom she leaves.

Agnes was the Rep for Leeds when things were very much more difficult with regard to universal provision of the old Mass and only a few weeks ago she told me that at one time the only priest who publicly dared to offer the Mass was Fr. Harry Tattan at St. Urban's, followed by Monsignor Diarmuid Scannell at Burley in Wharfedale. Her own brother Mgr. Hugh Boyle of Glasgow regularly offered Mass at the Shambles, York and St. John the Baptist, Normanton when he was on holiday in the summer months.

I shall personally always remember Agnes' kindness and wise and measured counsel when I was the LMS Rep following her successor Gerry Lyons.

She had only recently passed on some of her papers to me and the amount of work these represent to keep the Mass on the altars of our churches was breath-taking and in itself worthy of Almighty God's reward.

Even a cursory perusal of these papers tells the story of how the Mass was kept alive here and the kindness of Bishop Wheeler is eminently clear from her first written exchange with him.

Other letters are less encouraging and she was always keen to point out how much progress had been made from the days of when many Catholics were traumatised at the recent changes and who seemed thereafter to rely solely on damnatory private revelation and unpleasantness to further the cause. Moreover she was clearly aware of how such behaviour was a thermometer of those distant times.

She had an encyclopaedic recollection of events local, national and international and as a graduate of Classics and Modern Languages she was always able to help me with translations from and into Latin at the drop of a hat!

The sung Mass of Requiem will take place at the church of Ss. Peter and Paul, Yeadon on October 2nd at 12.30 p.m. followed by interment at Guiseley Cemetery.

May she rest in peace - a good and faithful servant.

(I shall repost this section nearer the funeral.)
at September 19, 2019

This weekend is the fourteenth Sunday after Pentecost and we have three Masses: 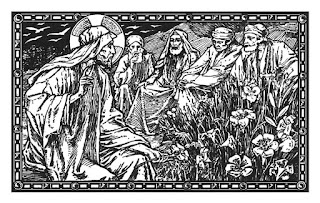 I am sorry to have to announce the death of Mrs Agnes Rutherford on Monday 9th. September in Leeds. Details of the requiem Mass and a fuller account will be posted when I have them early next week. Requiescat in pace.

Having recovered from a hectic week in Germany last week it is time for a quick update of events.

Saturday September 7th will see the next Ordinariate Rite Mass at St. Joseph's, Pakington Street, Bradford at the usual time of 3.00 p.m. 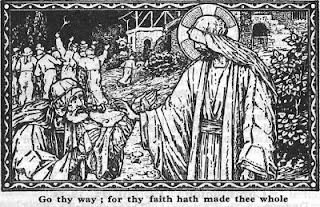 Sunday is the thirteenth after Pentecost and we have two Masses:

On Monday at St. Joseph's, Martin Street,  Brighouse there will be Mass at 10.00 a.m. Thanks to the new parish priest, Fr. Michael Hall for adding the EF into his already busy schedule. Fr. Hall is a regular celebrant at St. Joseph's, Bradford and offered our first Mass there on the first Sunday the church was officially designated as a home for the Extraordinary Form three years ago this week.

Also a reminder that the regular 9.30 a.m. Mass on Thursdays at St. Anthony's, Clayton, Bradford. The Mass there is offered by the parish priest, Fr. Winn, who will be joining the rota of priests who offer Mass at St. Joseph's, Bradford on Sundays.

Our seminarian James Baxter left for Italy on Monday to commence his studies at Gricigliano towards ordination in seven years. We wish him every success and look forward to hearing from him and seeing him in the future. His giving page is: https://www.gofundme.com/f/help-another-english-icksp-seminarian?fbclid=IwAR1CGy18sP2XsXy5FRf_TQ-zNwAkFmauuW_VpxPK_X0trWBzgD3q6CLMj7g