Mass for the seventh Sunday of Pentecost will be at St. Joseph's, Pontefract Road, Castleford at 3.00 p.m.

The Vigil Mass at Halifax last evening was well attended and Fr. Hall's sermon on Hell following his sermon last week on Heaven was again very well received. Thanks to Fr. Hall who has covered for Mgr. Smith. Next week we look forward to welcoming Fr. Parfitt at Halifax before Mgr Smith returns from his holiday.

I was delighted to see that my predecessor as rep, Damian Mc Caughan, was recently ordained to the Sacred Priesthood in his native Northern Ireland and is looking very well on it! Ad multos annos, Fr. McCaughan!

Belated congratulations also to Fr. Matthew McCarthy FSSP who was also ordained earlier this summer. I first met (Fr.) Matthew when I went to Manchester University and we were in the same hall of residence. I was delighted when he was accepted by the FSSP as a candidate for the Priesthood and moreso when I learned of his ordination.
Both newly ordained priests have offered Mass at St. Catherine's near Wigan and due to my ill-health I have been extremely sorry to miss both events. A recent fall left me with bruised ribs and has reduced my capacity to walk at a reasonable speed once again.

Preparations are well under way for our Mass at Wakefield chantry chapel on the feast of the Assumption at 7.30p.m. Please ask/contact me for a ticket. I have been given 20 to distribute. Our last Mass there, which was also sung by St. Austin's choir and the Leeds "schola greg", in December was very well attended and that was at the end of December - when the clergy had to vest in the flickering flame of two tiny votive candles in the tiny underground vestry. Parking is free, safe and plentiful. Fr. Hall, a native of Wakefield, is looking forward to offering the Mass.
at July 31, 2011 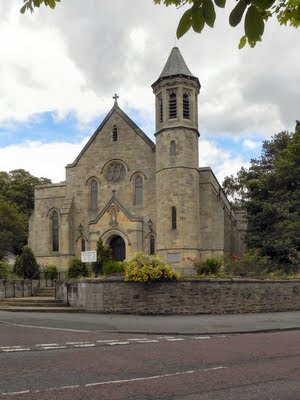 I was fortunate enough to be taken to Barnard Castle for the annual Founders Day Requiem and Absolutions at St. Mary's (pictured left). Fr. Elkin, the PP, who never seems to age (he's always looked like a senior to me) was the celebrant. At the garden party afterwards I was delighted to make the acquaintance of a lovely young couple who are to marry there in a few weeks and another chap who attended the LMS server training day at English Martyrs in York. The Mass was sung to a very soothing polyphonic setting with plainchant Dies Irae. I was very grateful to be taken to Barnard Castle and back in time for Mass at Halifax, by Mr. Burton who is one of our regular singers.

The Mass at Halifax was offered by Fr. Hall, who will be our celebrant again next week. Fr. Parfitt is to offer the Vigil Mass there on the first Saturday of August.

Mass on this Sunday will be a sung Mass (Pentecost VI) and is at 3.00 p.m. at St. Joseph's, Pontefract Road, Castleford.

PLEASE NOTE that the only Extraordinary Form Mass on Sunday will be at Castleford St. Joseph's, Pontefract Road at 3.00p.m. (No Masses at Heckmondwike or Leeds St. Augustine's.)
Due to clergy holidays there will be no Mass at St. Augustine's in August or September.
at July 16, 2011 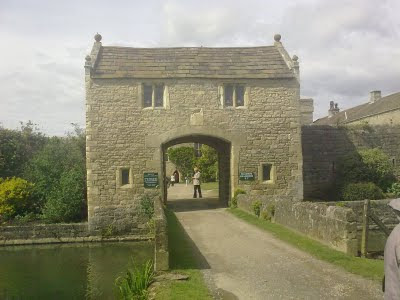 Thanks to Lady Curteis, Fr. Parfitt and the Leeds Schola Gregoriana for making this possible.
at July 11, 2011

I was recently delighted to learn that Father David Smith, Parish Priest of St. Mary's, Halifax was made a prelate of honour of His Holiness Pope Benedict XVI on the Feast of Saints Peter and Paul - the 60th anniversary of Priesthood of the supreme Pontiff and who henceforth will be referred to as Monsignor Smith. Monsignor has been a very good friend to the LMS for as long as I care to remember and is a regular weekly celebrant.

On the ecumenical front I was able to enjoy a very pleasant evening with a good friend of mine last week when I was introduced to a (non German speaking !) Lutheran Pastor who had come by a red cope from a Catholic monastery and because we didn't possess one was happy to donate it to us. At the same time I was able to visit St. Luke's Lutheran Cathedral in Headingley, Leeds - the smallest cathedral in England- a place where our own Bishop Roche has also prayed. Thanks to Pastor Mark for his kindness and generosity of spirit.

There will be no traditional Mass at St. Peter's, Bradford on Sunday (July 10th) as this would clash with the annual parish Garden Party. Normal routine resumes next month. Let us hope they have good weather. Reminder that there is a Vigil Mass at St. Mary's, Halifax on Saturday at 6.00 p.m. and on Sunday at St. Joseph's, Castleford at 3.00p.m.

On the first and third Sundays of the month Mass will now be offered at Holy Spirit, Bath Road, Heckmondwike at 4.00p.m. and as such the vigil Masses at St. Mary of the Angels, Batley on third Saturdays will now cease, as will the Friday Masses at Holy Spirit. Thanks to Fr. Abberton for the extra Sunday Masses.
at July 08, 2011