Mgr Grogan is well again and there will be Mass for the Feast of Candlemas with the customary procession  on Wednesday at 6.30 p.m. at St. Winefride's.

Fr. Aladics is still unwell and there will be no Mass at Ossett this week.

The Sunday Mass at St. Patrick's (Pentecost IV), Bradford is at the usual time of 1.00 p.m.

I shall post details of  Masses from Wednesday onwards on Tuesday. It is safe to assume that there will be no Mass at Ossett on Tuesday. I am still waiting to hear if Mgr Grogan has sufficiently recovered for the Candlemas Mass on Wednesday.

Walter Atkinson and Masses this week.

From the very early days of the reaction to the sweeping changes in the Catholic Church of the sixties and seventies, Walter (as he was always called) despite being baptized James, was for many years at the forefront of keeping the old Latin Mass a show on the road. He never interfered in the musical side of things, he never attempted to organise priests to say Mass or beg the use of churches or chapels. Others were there to attend to that. Walter was the man who served – served at the altar, guiding and helping priests and training altar servers through long and complex rules and rubrics to make sure that things went smoothly and looked as best they could in times which were generally trying and often disheartening. Walter never showed signs of fatigue or despondency when the going got tough. As the old song says when the going gets tough the tough get going.

Walter was a disciplined man. His time in Germany whilst doing his National Service in North Rhine Westphalia immediately after the war along with his medical training taught him that discipline and calmness, which he exuded most of the time. On the odd occasion people thoughtlessly rubbed him up the wrong way he became a formidable opponent, but he never lost Christian charity, slow to real anger and always able to laugh about it afterwards.

After National Service he spent some years as a nursing brother at Scorton in North Yorkshire which was a pioneering establishment in the 1950s. Originally established in the 1850s in France,  with the intention of creating a foundation for ‘unwanted people’, ‘cripples and incurables’, Walter was known in the religious life as Brother Noel Which always amused him. After a lengthy period of discernment, he decided that the religious life was not for him and he left the Order to take up nursing professionally. In this field he excelled. Further studies and hours of hard work saw him become the head of the hospital training school at Meanwood where he was revered as an invariably fair but firm and immensely likeable taskmaster. He trained many nurses in his time there including two daughters of the notorious Idi Amin who served as the third president of Uganda from 1971 to 1979 and de facto military dictator. He is considered one of the most brutal despots in world history. Walter knew who the girls were (and moreover who their father was) and of them he simply said they were sound students who nursed with compassion. On one occasion one of these daughters was late getting to school she met Walter walking up the path and apologised for being late to school. In true style Walter told her not to worry. “I am the school”, he said!

When Bishop Konstant relaxed restrictions on the Latin Mass in 1988 we were allowed use of the generally unused Cemetery Chapel at Killingbeck, where Walter’s human remains will spend the rest of time. There was very little by way of vestments and equipment to celebrate Mass in a dignified fashion and over the next twenty odd years, till there was further easing of restrictions against the old Mass, Walter provided, out of his own pocket, everything imaginable to make the celebration fitting and worthy of worshipping God in the traditional Catholic manner. The vestments used at his requiem were made by Walter at his home on a sewing machine at the kitchen table, along with similar sets in red, green, white, gold, rose and purple. He bought a photocopier and spent hour upon hour making booklets, altar cards, pamphlets, instruction manuals, hymn sheets, checklists and aids to memory for priests and servers. He bought sacred vessels, candles, candlesticks, incense, a thurible and all manner of things which are still used today in the many places we are now thankfully permitted to still have the old Mass. His efforts have been rewarded.

At the same time he was a voracious reader and spent hours tracing his family tree – not only the Atkinsons on his father’s side but the Cookes on his mother’s side. Writing to the Scottish Registry of births, deaths and marriages he was amused to learn that one of his great grandfathers had died from “the effects of the abuse of ardent liquor”.

His knowledge of art, history, nature, human anatomy and physiology were way above those of the average man.

Walter wasn’t a man who abused ardent liquor but he was always at the hospital parties and rarely missed a Friday night out with his friends and colleagues in local pubs. He said he hated turning up to a party to find others had had a “skin-full” and did all that was necessary to catch up with them.

Such was the man.

Kind to all who sought his help, sociable, he was a faithful son of the Church and a very decent and honest man. He looked after his mother for many years as she was ravaged by the effects of dementia. He only ever left her – pinned to the chair – to keep her safe, whilst he went to his Latin Mass on a Sunday afternoon. It helped him to keep his sanity he said.

May he rest in peace.

I understand Fr. Aladics is still unwell and so no Mass on Tuesday at Ossett.

No Mass either  at St. Winefride's on Wednesday as Mgr Grogan is also ill and so he was unable to offer Mass today at St. Patrick's. Many thanks to Canon Wiley for stepping in to cover for him.

Masses on Thursday at 9.30 a.m. at St. Anthony's, Clayton and at St. Joseph's, Back Street, Pontefract at 7.00 p.m. The Mass at Pontefract will be a requiem for Walter Atkinson.

Thank you to those who expressed concern about me after my tumble last week. Yes, I'll put more water in it next time and moreover look where I'm going!

As advised last week there will be no Mass at Ossett on Tuesday. I will give further information about next Sunday (23rd January) later this week when I hear from Father that he is well enough again.

There will be the usual Mass on Wednesday at 6.30 p.m. at St. Winefride's, Wibsey.

Thursday Mass at 9.30 a.m. at St. Anthony's, Clayton as usual but no Mass at Pontefract as the canon is away.

Reminder of the Requiem Mass for the late Walter Atkinson on Monday 24th. January at 1.00 p.m. (and NOT 11.00 a.m. as I originally announced). This will be at St. Anthony's, Old Lane, Beeston, Leeds. Many thanks to Fr. Whitwell for his hospitality. The celebrant at this Mass will be Fr. Driver. I'll post an obituary later this week.

Fr. Aladacs must isolate himself for several days and so there will be no Mass on Sunday or next Tuesday. I'll post information nearer the time about the following Sunday. We wish Fr. Aladics a speedy recovery.

Today I attended a Mass for Fr. Parfitt whose burial took place this time last year. It was very strange after a year to go back to Broughton and no less strange to not see him saying the office or piking wax off candles.

I hadn't realised that Mrs Tempest of Broughton Hall had died on Christmas Day and so there was another sense of absence in the chapel I've been attending for 37 years. 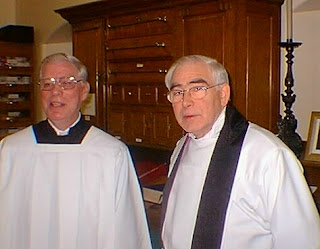 The saddest news from me this week is the death of  Walter Atkinson, pictured above with the late Mgr Peter McGuire after a traditional Mass at the Cathedral many years ago.

Walter taught me to serve and was a stalwart in the early days of the lawful fightback against the swingeing changes of the late sixties and early seventies. An obituary will appear on here in due course.

I was heartened to hear from Belfast priest Fr. Damian McCaughan who played such a great part in the lives of  traditional Catholics of Leeds before going forward to the seminary.

Here is what Fr. Damian wrote:

Thank you so much for letting me know about Walter - may he rest in peace.  I will offer a requiem Mass for him and have him prayed for at our parish Masses over the weekend.

Walter played a special part on my journey towards priesthood from the first day he asked me to help serve the Mass at Killingbeck.  He was always encouraging, modest and good humoured in teaching me the rubrics and was himself an excellent Master of Ceremonies.  He also had a very dry (but always charitable) line of observations about the various eccentrics.  He was also an accomplished seamster and the sets of low Mass vestments he made for use at LMS Masses were a credit to him.
I still have a copy of his 'aide-memoire' for celebrants and I regularly frustrate servers used to the ICKSP way of doing things by insisting that at my Masses we do things the way I was taught in Leeds!  Walter was a living link to the liturgy as it was really celebrated in diocesan parishes by generations of English and Irish priests and people, and I feel very privileged to have been able to learn from him (along with Fr Parfitt).
I'm sure a great reward awaits Walter now and that our prayers and Masses for his soul will assist him on his way.  Requiescat in pace.
at January 14, 2022 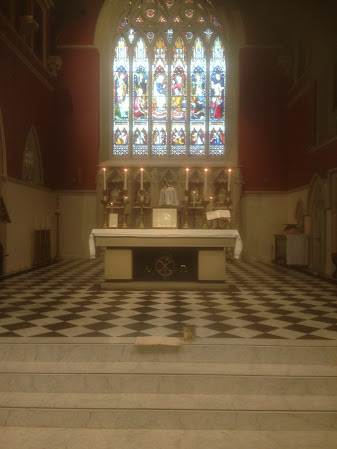 The first missa solemnis at St. Patrick's, Bradford was a great success. Thanks to the clergy, singers and servers.
We have arranged another high Mass next month on the feast of Sexagesima (Feb 20th).
This week:
Tuesday: St. Ignatius, Ossett, 6.00 p.m.
(No Mass at St. Winefride's  on Wednesday)
Thursday: St. Anthony's, Clayton, Bradford, 9.30 a.m. (no Mass at Pontefract)
Friday: St. Ausitn, Wakefield, 7.30 p.m.
Sunday: St Ignatius, Ossett, 8.30 a.m. 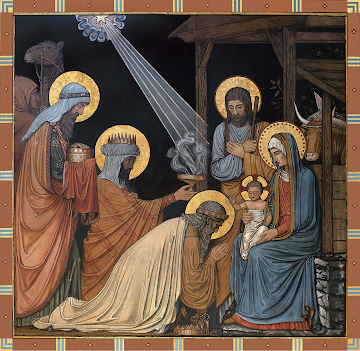 This week Masses as follows:

Thursday is the feast of the Epiphany. No Masses at Clayton or Pontefract.